When in Boston, MA - 5 Must See Art Destinations


"Years ago I decided that the greatest need in our country was Art… We were a very young country and had very few opportunities of seeing beautiful things, works of art… So, I determined to make it my life's work if I could."

- Isabella Stewart Gardner, on the creation of her Museum, 1917

Recently, I was in Boston for a landscape workshop with Marc Dalessio hosted by Leo Mancini-Hresko at Waltham Studios. It was so nice to return to Boston. The last time I visited, I lived at Ft. Devens about an hour northwest of Boston. On weekends, friends and I would take the train into Beantown and explore this lovely city. Unfortunately, it had been too long between visits.

To catch up with my friend, I arrived a few days before the workshop and began my exploring.  Here's where I visited, in no particular order.

The Central Library at Copley Square. The Boston Public Library System was founded in 1852 and was a pioneer in the movement of free municipal libraries in America. The Central Library opened in February 1895. It has over 700,000 volumes and a print collection that includes 200,000 prints and drawings and 120,000 chromolithographs.

The building itself is a masterpiece. Charles F. McKim designed the building in the Renaissance Beaux Arts style. It blends art and architecture in a space that was designed for public use.

In 1890, they began to collect art with the idea of building a museum. Around 1898, after the death of her husband, Mrs. Gardner began plans to build a Venetian-style Palazzo to house her collection.

After the construction of the Palazzo - Fenway Court concluded, Mrs. Gardner took one year to curate the collection.The collection is comprised of more than 2500 pieces that are diverse and carefully chosen.


Isabella Gardner installed her collection of works in a way to evoke intimate responses to the art, mixing paintings, furniture, textiles, and objects from different cultures and periods among well-known European paintings and sculpture.

The museum opened to the public in 1903 and Fenway Court would serve as the permanent home to her collection. After the opening, Mrs. Gardner lived on the fourth floor and remained there until her death in 1924.

Here's a fun piece of information - if your name is Isabella, you receive free lifetime admission.


Boston Museum of Fine Art (MFA). Opening in 1876, the Museum's first home was in Copley Square near the Central Library. In 1909, the MFA moved to a new Beaux Arts Building on Huntington Avenue near the ISG Museum.

When visiting, wear comfortable shoes. The collections are inspiring, but there are miles of hallways and galleries to traverse. Fortunately, when you purchase a ticket, it's good for two days if you return within ten days. I took advantage of this and still only saw a fraction of their collection.

The museum offers free tours throughout the day to the various exhibitions. After arriving on my first visit, I took the tour of the Americas. The tour began with early American art with paintings by John Singleton Copley and a bowl by Paul Revere. The tour ends with contemporary artists such as Jackson Pollack.

The America's tour includes a number of paintings by John Singer Sargent including The Daughters of Edward Darley Boit. The museum's Sargent collection is comprised of approximately 500 objects. To add to his civic work from 1921-1925, Sargent painted murals for the museum in the Rotunda and the Colonnade. In response to his work at the Central Library and the MFA, Sargent soon became Boston's favorite painter. 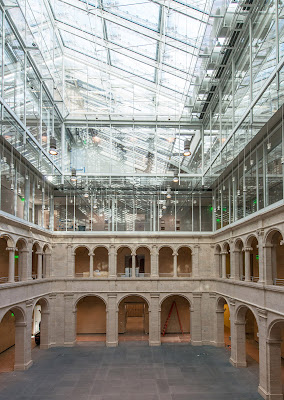 Harvard Art Museums in Cambridge. The University of Harvard originally had three museums -  the Fogg Museum 1895, The Busch-Reisinger Museum 1903, and the Arthur M. Sackler Museum 1985. All were situated near one another on one entire city block.

In 2008, work began to increase the gallery space and connect all of the galleries. This project designed by architect Renzo Piano, was completed in 2013. The result is an impressive Glass Pyramid shaped roof uniting all of the galleries, which added 40percent more space.

The central courtyard is light filled and stunning. The collections are equally impressive. 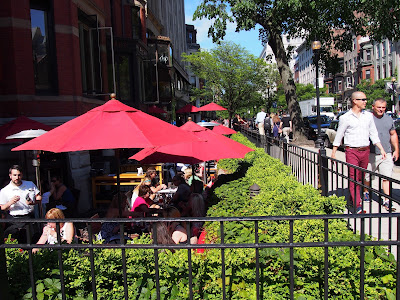 Newbury Street is home to galleries, boutiques, and sidewalk cafes. After a couple of days in museums, it was time for a change of scenery.

I discovered Newbury Street quite by accident. Prior to my visit a friend, recommended a stop at The Guild of Boston Artists. After arriving on Newbury Street, I knew it was the place to spend the day exploring, shopping and of course eating.

The Guild of Boston Artists  was originally established in 1914 and started by Edmund Tarbell, William Paxton, and Frank Benson all prominent artists of the day. Currently, there are around 45 exhibiting artists and includes artists such as Joseph McGurl, J.C. Airoldi, and Donald Demers to name a few.

Vose Galleries  Vose, established in 1841 is the oldest family-owned art gallery in America and has established a reputation for expertise in the history, acquisition and valuation of American art. The gallery has helped to build numerous public and private collections. Vose paintings hang in over 150 museums nationwide.

While walking down Newbury, I happened upon Vose Galleries. It's a remarkable gallery with museum quality paintings I have seen in books. There were several, Sargent drawings, as well as works by, Edmund Tarbell, William Paxton, and Lilla Cabot Lodge. Current artists featured were Donald Demers and Liz Haywood-Sullivan.

Other galleries I visited were Newbury Fine Arts showcasing contemporary artist and Gallerie d'Orsay featuring classical and contemporary works such as Rembrandt, Picasso, and Chagall. I enjoyed a delicious lunch at Piattini, a rustic Italian restaurant. The fresh bread, pasta, cappuccino, and Tiramisu were delicious. Of course, I had to skip dinner.

The trip was a great reunion with my friend, and the weather was so cooperative during the entire visit. I'll be writing an article on Marc Dalessio soon and sharing some of his insights on landscape painting.

I hope this inspires you to visit Boston, whether it's for art, history or Isabella Stewart Gardner's beloved Red Sox. There is so much to explore and experience. Enjoy!!